I’m back! College is hard especially when you overthink every step you take. I am trying not to. I am processing, I will post about that soon…. hopefully! I make no promises.

Anyway, I have this friend, I will name him Johny for this post. We love Johny, Johny is the homie but Johny has so many hard times with relationships and sometimes Johny is a bit snarky with the conversation of love and all of its excitements!

Today we had a conversation about both of our interest in dating people, mine for commitment and him for sex. lol.

He told me that no matter what person I’m interested in, I am guaranteed to get them simply because it’s cuffing season.

Now, I swear I am so behind on the whole dating scene because I refused to date due to my childhood trauma (hahaha, you’ll find out in a later post). I’m at a point where I am determined to forgo that belief and to move forward into a healthier and happy life with another person one day.

Now with all that hope, you could understand why I’m a bit sketchy about the whole cuffing season thing.

Do people purposely get into “cuffing season” relationships? Like, do people voluntarily mixed themselves up with people during the cold seasons only to drop them in the future? Just so that they don’t have to be alone? For a body to cuddle with? 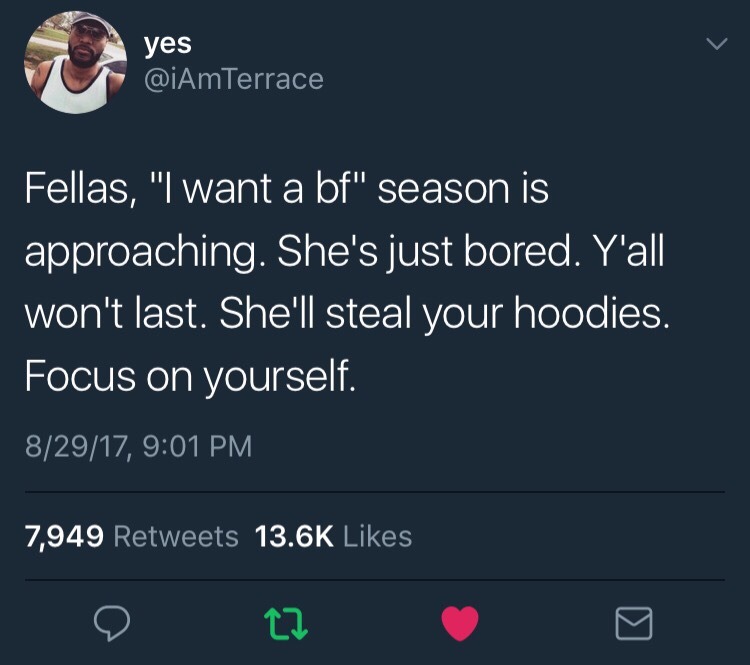 Might as well find a continuous fuck buddy with the knowledge that nothing will come of it. Like why not walk into a relationship and say, “I just want someone who physically gives me comfort during these cold months. Are you down?

Otherwise, by the time, Valentine’s Day comes around one or both of you are skirting around the possibilities and knowing that both of you will end things soon.

I feel like it’s such a high school concept, the cuffing season, 4 or 5 months of a fake relationship. Aren’t relationships supposed to made of connecting with people and growth and understanding and all that happy shit? What do you even do in a “cuffing season” relationship?

According to the internet, you don’t invite them to hang out with friends or family. Do you even get all those cute moments at the beginning of a relationship? No, because you’re mostly cuddled in PJ’s and doing nothing but Netflix and sex.

If anyone could tell me the value of a “cuffing season” relationship, I’d be all ears but that all sounds crazy to me. There are relationships that are openly nonmonogamous or not long term but those are discussed in the beginning. If you follow the dating season calendar, you’d be back on the market by summer. Might as well stick with someone until it all fizzles out.

Oh… the stupidity. Just get a heated blanket or a weighted one and go on a meditation retreat and find yourself.