Hello, Hello! We are back at it again!

This post is apart of a series I am doing on Afrofuturism. I will be posting something new every week!

While doing my research, I was so excited to learn that Afrofuturism began back in the ’50s with an artist named Sun Ra. I first heard of him in Afrofuturism: The World of Black Sci-Fi and Fantasy Culture by Ytasha L. Womack and I went on a crazy google spree right after.

Sun Ra was born named Herman Poole Blount (I know, such a mundane name for such an amazing creator). He was born in Birmingham, Alabama in 1914 and grew to be a Bandleader, composer, arranger, artist, and poet who played jazz, Bepop and Space Music. If you’re wondering what the hell Space Music is, don’t worry. So was I. We’ll be touching on that soon.

Herman Poole Blount let go of his past identity and created a persona named Sun Ra or Le Sony’r Ra. With this persona, he told everyone that he was an alien on a mission to preach peace.

During his four decades of popularity, most of Sun Ra’s past was a mystery. He encouraged this by spreading contradictory news about his life, claiming he was born between years 1910-1918 in order to confuse people and maintain his outer worldly persona.

It wasn’t until close to his death that writer John Szwed wrote Space is the Place: The Lives and Times of Sun Ra, published in 1998. (A must read. The information below comes from sites written about the book.)

When he was young, Sun Ra taught himself how to read music and play the piano. All through his adolescence, he showed passion for music, he would memorize sheet music for his band practice in and he began composing music around 11 or 12. In school, he was an honor roll student who kept to himself.

In 1934, Sun Ra’s was offered a full-time musical position by his biology teacher, Ethel Harper who was a singer in the Ginger Snaps. He toured with Harper’s group across the U.S. Harper left the group mid-tour and Sun Ra took over until the tour. The tour accumulated a lot of fans but it ended when the tour stopped making a profit.

After the tour, Sun Ra worked as a musician in Birmington and studied at Alabama Agricultural and Mechanical University until he dropped out and began his journey preaching peace.

When Sun Ra dropped out, he knew that he was on a mission. He knew that the universe was calling him to do something better. In the book written by John Szwed, Sun Ra said:

My whole body changed into something else. I could see through myself. And I went up… I wasn’t in human form… I landed on a planet that I identified as Saturn… they teleported me and I was down on [a] stage with them. They wanted to talk with me. They had one little antenna on each ear. A little antenna over each eye. They talked to me. They told me to stop [attending college] because there was going to be great trouble in schools… the world was going into complete chaos… I would speak [through music], and the world would listen. That’s what they told me.[12]

Sun Ra seriously went out there to follow his dreams and so should you because LOOK AT THIS DUDE!!! 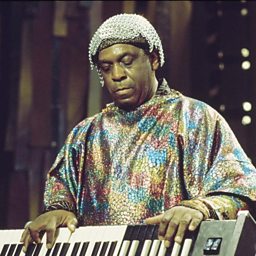 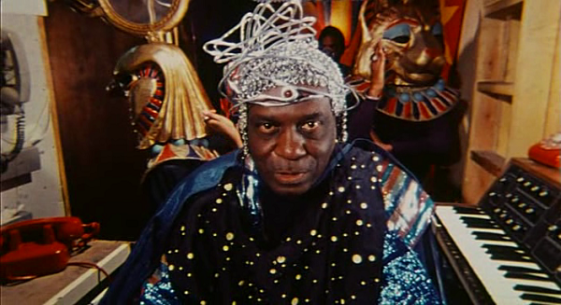 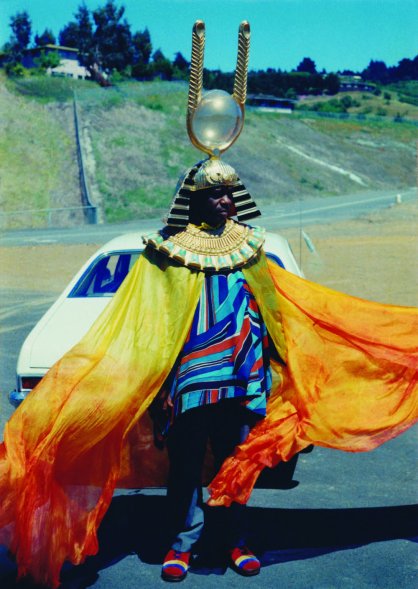 HE CAME THROUGH KILLING THE GAME!!!!

He let all of his creative juices flow. He truly expressed himself in a world that did not openly express black men being THIS outrageous. His outfits were totally out there during the ’50s. First of all, I want to wear that outfit in that last pic. He looks amazing! I’m wearing it at AfroPunk.

My parents were around during Sun Ra’s prime time. They went to his shows and they both claim that he was pretty out there. My dad said that people would leave his performance holding their ears, heads, whatever in fear because his sound was too much.

I am listening to Astro Black as I write and I describe his music as offbeat but in the best possible way. His sound doesn’t conform to my expectations of what jazz or Bepop but it definitely sounds like it’s from out of space. It’s cosmic and epic. There are these wild sounding notes that must be played on a guitar or base but it is played in an out of this world kind of way.

My father describes his sound as “a dissonance and cacophony of sound”. He says that Sun Ra would play your typical jazz and then take you away with his space music and then bring you back to earth. His sound is an experience.

For my next post,  I will be discussing Sun Ra’s Arkestra. I am really looking forward to delving in.

If you have any more information about Sun Ra or any other Afrofuturism creators, please let me know!

One thought on “Sun Ra| Afrofuturism”